Until I had the books in my hands, I worried that Saturday morning would come and I wouldn’t have any books to sell! But fear not, Meradith from Troy Book Makers did everything in her power to get my book on time. I highly recommend her and the company! 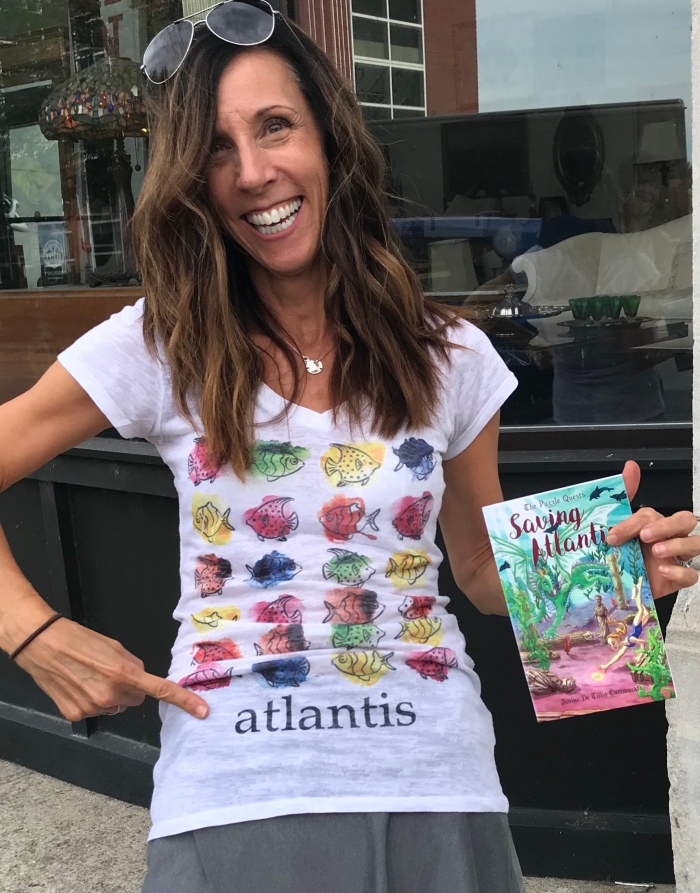 Karen, one of my prestigious proofreaders and inspiration for mother of Rose wore her special Atlantis t-shirt. I can always count on her to go all in!

So now the fun begins. There are many opportunities to get a copy of your book, and I want to support independent bookstores. Purchase a copy of Saving Atlantis or Shimmer’s Eggs between September 21 and October 5, take a photo of you with either book outside the independent bookstore so its name is visible. Share on my Facebook page Instagram or Twitter with hashtag #savingatlantisindiebookpromo and your name will be entered into a drawing to win one of two puzzles.

Check out the many opportunities to get your copy. I hope to see you at one of my events. Thank you to everyone who has helped me fulfill my dream of writing and sharing my adventurous stories!

Please remember that September is Childhood Cancer Awareness month. Part of my mission as a writer is to share hope for anyone going through a life-threatening illness or loss. No matter where you are there is hope. Partial proceeds from all my book sales benefit Nick’s Fight to be Healed Foundation, which emotionally and financially supports children with cancer.

The third draft of book two of The Puzzle Quests is almost complete. Rewriting a book is basically like rearranging  those puzzles where you have to shift one word in order to make a sentence fit. Or slide a paragraph in order to make the whole picture make sense.

This is where I am right now. I have pages printed out and marked up. I have a word document with the actual draft, another with deleted passages (because you never want to permanently delete anything!), another with passages that will go into Mark’s Book Three, and a final one that contains passages based on Peter’s Book Four.

Peter has been a pest with Book Two. Of course he wants to be in the picture, because he has a lot to say about what Rose does. Rose has her moments of jumping into situations, which is why they probably get along so well. It’s more fun when you have someone to get in trouble with!

For example, Rose doesn’t think about what could happen when she swims off after a monstrous octopus, because he happens to have one of the missing Aegean Sea coins stuck in one of his suckers. Rose knows this coin is one of the five needed to save Atlantis. When the octopus hides between two rocks, Rose doesn’t take no for an answer. We have to applaud Rose for her determination, but sometimes she has to learn to walk away or wait for help.

When the octopus attacks and Rose is caught in its arms, pulling her further and further into the ocean depths, it takes her sea dragon, Sparkle, and the mermaid, Natalia, to save her. She manages to get the coin, but at what expense? Her friends, her life?

For me, writing a magical world is probably the best occupation in the world. I am inpatient like Rose and jump in with both feet. But that’s how I learn what works and doesn’t work. It’s a game of creating, shifting, and puzzling dilemmas. Ones that I hope you will enjoy.

Look for The Puzzle Quests: Saving Atlantis in the Fall of 2018!